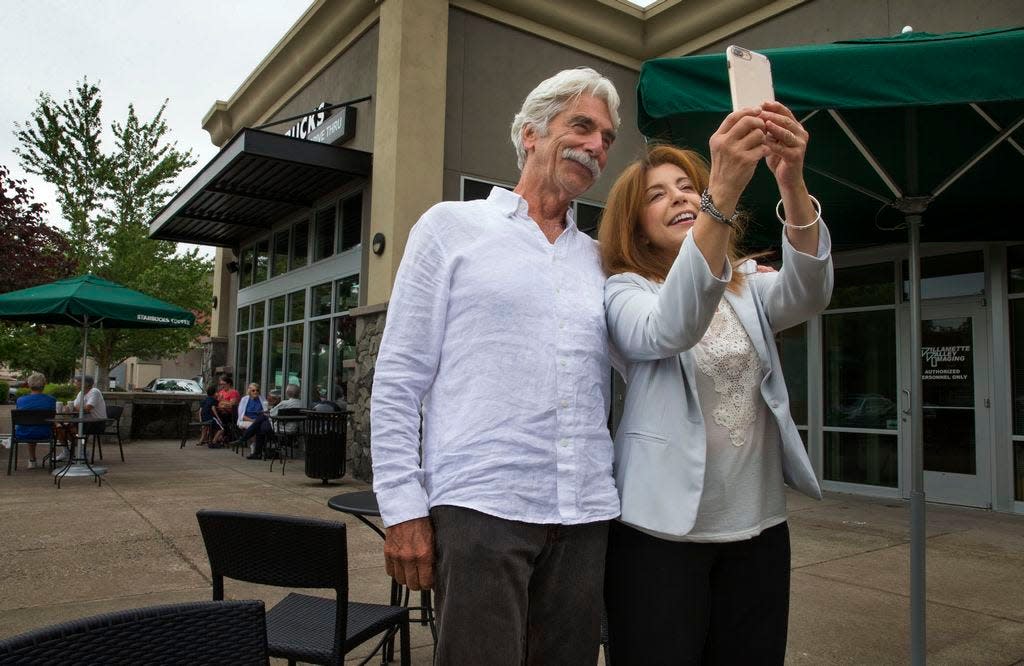 Editor’s note: This story was originally published in July 2017 just after Sam Elliott finished filming “A Star is Born.” He’s now starring in “1883,” a prequel to “Yellowstone,” streaming on Paramount+.

It’s that inimitable baritone; a deep, sonorous drawl that’s addictive to the ears, can make women melt and make men half his age wish they had just half his machismo.

His is the voice that tickled audiences as The Stranger in the 1998 Coen Brothers film “The Big Lebowski” with lines such as: “Well, a wiser fella than myself once said, ‘Sometimes you eat the b’ar, and sometimes the b’ar, well, he eats you.’ ”

Sam Elliott, veteran Hollywood actor and — maybe you didn’t know this — part-time Linn County resident, along with his wife of 33 years, Oscar-nominated actress Katharine Ross, is not talking about his five-decade film and television career, the one that’s hotter than ever even as his 73rd birthday looms.

No, Elliott is sitting on the patio of the Starbucks at Delta Highway and Green Acres Road in Eugene talking about what he’s going to do later that day: “I’m gonna go from here to Jerry’s (Home Improvement), and I’m not looking forward to it,” Elliott says. “I like Jerry’s. I got nothin’ against Jerry’s, but all of a sudden moving around town is not as easy as it was.”

Not when you star in two Netflix series and you’re getting some Oscar buzz for your latest film, “The Hero.” Not when you just wrapped a role starring with Bradley Cooper and Lady Gaga in the remake of “A Star is Born.” Not when you’re expected in the Massachusetts woods later this month to star in something called “The Man Who Killed Hitler and then The Bigfoot.”

The guy who has the “world’s greatest living mustache,” according to Rolling Stone film critic David Fear, is starting to talk about how “it’s insane,” all of this work coming so late in his career, when a stranger, Ginger Balazs, suddenly walks up and wants to know: “Can I join the party? You look just like my husband. I have to show you a picture of him!”

“No,” Elliott kindly says. “I don’t want to see a picture. We’re in the middle of an interview.”

Balazs’s Columbia Bank co-worker, Delores Wilson, has already mustered the courage to politely interrupt this conversation and ask for a photo with the star of one of her favorite shows, “The Ranch,” the Neflix sitcom about a dysfunctional Colorado family that also stars Ashton Kutcher and Debra Winger.

Both women apologize, and Elliott complies — as he does when it happens again and again over the course of a couple of hours — snapping a selfie with each of them before they return to work at the bank next door to Starbucks.

“The Hero,” a 93-minute indie film made in just 18 days for only $1.2 million last year in Los Angeles, has been playing at the Broadway Metro in downtown Eugene since June 30. It’s a rare leading-man role for Elliott, who stars as Lee Hayden, an aging actor with a golden voice and a fading career who is known mostly for playing cowboys in westerns and confronts his own mortality after being diagnosed with cancer.

The similarities between Elliott and Hayden are no coincidence. Writer-director Brett Haley wrote the script specifically for Elliott after the two first worked together on 2015’s “I’ll See You in My Dreams.”

The role is getting Elliott some of the best reviews of his career.

Two of those reviews — Rolling Stone and The New York Times — have used the term “national treasure” in describing Elliott and his performance in the touching comedy-drama.

But he’s also getting some early Oscar consideration, as these online headlines attest:

The latter website lists Elliott as one of five “front-runners” for the best actor Oscar, ahead of 17 “contenders” that include previous winners Tom Hanks and Daniel Day-Lewis.

Elliott, who has never been nominated for an Academy Award, doesn’t put much stock in reviews or Oscar predictions eight months ahead of the March 4 ceremony.

Asked what it would mean to him, though, to be sitting there in Hollywood’s Dolby Theatre, next to Ross, 77, who plays his ex-wife in “The Hero” and was nominated exactly a half century ago for best supporting actress as Elaine Robinson in 1967’s “The Graduate,” Elliott says: “Well, you know, recognition by your peers is about as big as it gets. I would never pooh-pooh that. That said, I think there’s a lot of solicitation … and maybe some politics in it.

“If people go see the movie, that’s the reward. The reward is in the making of the film; doing the work — it’s all about the work.”

Samuel Pack Elliott was born Aug. 9, 1944, in Sacramento to Nelson Elliott, a predator control specialist for the U.S. Department of Fish & Wildlife, and Glynn Elliott, who later taught at Reynolds High School in Troutdale. He has an older sister, Glenda, who lives in Southern California.

Their parents were born in Texas, where the family’s roots go back generations and one great-great-great-grandfather served as a surgeon during the Texas Revolution in 1835-36.

In 1957, when Elliott was 13, the family moved to Portland after his father was transferred. Young Sam attended Madison High School as a freshman and David Douglas High School his final three years, graduating in 1962. A top prep hurdler in the state, Elliott enrolled at the UO in the fall hoping to become one of legendary UO track and field coach Bill Bowerman’s “Men of Oregon.”

“I had visions of being a ‘Man of Oregon’ but didn’t have what it took and was not ever academically inclined, ” Elliott says. “I came down here and (messed) around and got booted out.”

After leaving the UO and enrolling in Clark College in Vancouver, Wash. — where he ran both the 120-yard high hurdles and the 360-yard intermediate hurdles — Elliott appeared in the college’s production of “Guys and Dolls.”

After obtaining a two-year degree in 1965, he re-enrolled at the UO and pledged the SAE fraternity, still hoping to obtain a four-year degree. But again, academics were not his thing.

Then his father died of a heart attack in Portland at age 54.

“That killed me,” Elliott recalls.

His mother lived to be 96, dying in Portland in 2012. Elliott now owns the family home in northeast Portland.

In the years before he died, Nelson Elliott, who never graduated from college himself but wanted that more than anything for his only son, told him that his chances of landing on the big screen were unrealistic.

“He gave me that proverbial line, ‘You’ve got a snowball’s chance in hell of having a career in (Hollywood),’ ” Elliott recalls. “He was a realist, my dad.

“He was a hard worker. He had a work ethic that I’ve fashioned mine after, and I thank him for that every day.”

With matinee-idol looks, a quiet confidence and that distinctive voice, Sam Elliott moved to Los Angeles in the late 1960s and soon signed as a “contract player” with 20th Century Fox.

His first role came on the TV cop drama “Felony Squad” during the 1968-69 season. He landed his first film role, Card Player No. 2, in 1969’s “Butch Cassidy and the Sundance Kid,” which also starred Ross, although they would not begin dating until both starred in the 1978 horror film “The Legacy.”

Elliott and Ross purchased their 200-acre Linn County property that sits a few miles south of Brownsville in the mid-1990s, Elliott says.

They’re only here about a month per year and head back this week to their seaside home in Malibu on property they’ve owned since the 1970s. They hope to live in Oregon year-round eventually.

Still, Elliott has in many ways become just one of us: someone who buys his groceries at Market of Choice (he’s most commonly spotted at the Green Acres Road store), his steaks at Long’s Meat Market in south Eugene and his gardening supplies at Down to Earth near Fifth and Olive streets.

“He’s just the greatest guy,” says David Cothern, who works in the Down to Earth nursery that Elliott likes to frequent. “So personable and easy. If all of Hollywood were like that, what a better world it would be.”

And when Elliott has a hankering for fish and chips? He heads to Newman’s Fish Company on Willamette Street.

“I’ve eaten at Newman’s three times this week,” he says.

Keep your eyes peeled, and you might even spot Elliott at Saturday Market. He was there on July 1 with his 32-year-old daughter, Cleo.

“I covered up my head and shut my mouth and had a ball,” Elliott says.

Covered your head with …?

“Yeah,” Elliott says, “so I looked just as weird as the rest of ’em. I love the Saturday Market.”

This article originally appeared on Register-Guard: Oregon’s Sam Elliott starring in ‘1883,’ a prequel to ‘Yellowstone’

what is computer science