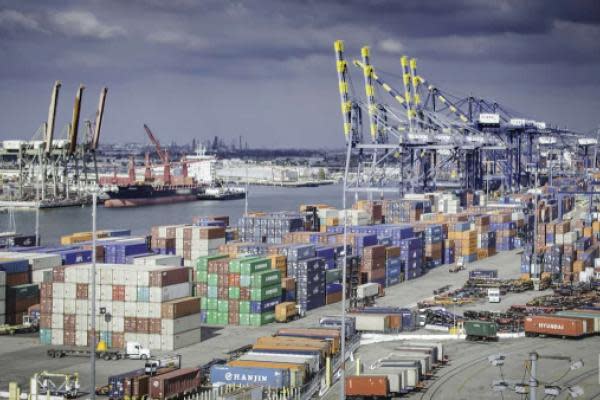 Ports around the globe will have to change the way they do business in a post-pandemic world.

Port officials already are changing the way they interact. The World Ports Conference was to have taken place in March in Antwerp, Belgium, but the spread of the coronavirus foiled that plan. So on Wednesday, industry thought leaders conducted the first in a series of webinars, this one titled “Business as Usual: Adapting Port Business Models to Survive and Thrive in the Post-COVID-19 Era.”

Port of Los Angeles Executive Director Gene Seroka said the Western Hemisphere’s largest seaport has suffered “two horrible shocks to the supply chain. One were the ill-advised trade policies out of Washington and second COVID-19. The knock-on effects of both will be felt for the rest of this year and into 2021. We simply don’t have the demand in our economy today to support any notion of recovery in our industry for the United States and its major markets — 70% of the U.S. economy is driven by consumer sales products and consumption. That simply is not happening today.”

Seroka predicts “a very slow reemergence of the American economy at the national, state, county and local levels over time.”

The webinar sponsors — the International Association of Ports and Harbors and IHS Markit — also believe that over time industry leaders will gather in person again and noted that the World Ports Conference has been moved to June 23-25, 2021, in Antwerp.

“In the end, I believe we will lose 15% of our imports because of the trade policies, but what it gives us is the opportunity to reinvent ourselves — how we go to market, the fact that we will overinvest in our export segment of the business to help this reemerging economy whenever it takes place,” he said. “We will help American companies get back to the markets overseas they once enjoyed, and those great partnerships will help them explore new markets. And maybe if we have a better balance of trade coming through the Los Angeles gateway, we may have an opportunity to reduce our cost to serve and be more attractive to people who want to participate in the supply chain through Southern California. So there’s some huge upside here.”

There also are huge obstacles, according to Theo Notteboom, an authority on seaports.

Notteboom, a professor at the Shanghai Maritime University, Ghent University and the University of Antwerp, said there is an “avalanche of things that are hitting the ports.”

“We see a huge drop in the exports from Asia — a 15 to 20% drop to Europe and North America,” Notteboom said. “Of course we’ve seen a lot of blanked sailings, about 20% of the network capacity on average of the container shipping lines is now inactive. We have a lot of idle ships, between 2.5 to 3 million TEU of capacity is now idle.”

Notteboom said although he does not expect any bankruptcies among the major shipping lines, they have gone into “survival mode” as flow patterns have been severely disrupted during the pandemic.

Port operations, however, have not had the kind of disruptions that have plagued other parts of the maritime industry, Notteboom said, referring to the crisis of crew members scheduled to be relieved from duty but prohibited from disembarking ships around the world.

“Only a few ports refer to shortages of dockworkers or shortages of truck drivers. It seems that despite these limits that we have right now in terms of how to perform work, things are close to normal at many ports around the world,” he said.

Jan Hoffmann, chief of the trade logistics branch of the United Nations Conference on Trade and Development, agreed port operators are weathering the crisis and also criticized “the fact that seafarers are stuck on the ships and cannot change and cannot fly home. I’m not sure if all port workers are really in solidarity as they could or should be with their colleagues on the ships.”

Seroka said U.S. West Coast ports had help making sure operations were as close to normal as possible.

“I would like to thank International Longshore President Willie Adams and [Pacific Maritime Association President] Jim McKenna for the work that they did to get coastwide rules on safety for our workers during this unprecedented pandemic. There was meeting after meeting, discussions with leadership on both sides to make sure that we had a plan through all 29 ports up and down the west coast of the Pacific,” he said.

“In particular, early on, before we knew a lot about what was happening, we were called by one of our local officials at the ILWU who told us point-blank that our terminals ‘do not have the proper cleaning solution and materials to get the longshoremen and women feeling safe when they hand off equipment.’

“We immediately jumped into action and with our partner agency here in Los Angeles, the Department of Water and Power, we secured 700 gallons of industrial bleach that were quickly diluted by our hazmat team, poured into 32-ounce bottles that staff and myself went out to our local home improvement stores to buy, and distributed to all terminals at the ports of Long Beach and Los Angeles,” Seroka said. “All of that happened within hours, but it set the tone for what we wanted to do on the safety front with our workforce on the waterfront.”

Hoffmann looked at differences between the COVID-19 pandemic and the financial crisis of 2008-09, saying then there was a problem of less demand. Today the problem is with a lack of supply.

“The factories are closing down. The planes are no longer flying, there’s no space in the belly for cargo,” he said, pointing to U.N. figures that estimate global trade will be down 27% in the second quarter of 2020.

Notteboom also sees differences between 2008 and 2020.

“We see much more optimism on how to get out of this situation. Although this is a very serious disease, I think we have more control of how we can get out and how we pick up where we left off. I think overall also, the 2008-2009 crisis was different in the sense that this was something unexpected, at a time when people thought the sky was the limit. … There was a very good market situation just before the crisis,” Notteboom said.

The 2008-09 financial crisis “hit and it led to a lot of pessimism among people,” he continued. “Now I see a lot of optimism. I see people are very anxious to work hard to make sure we can pick up where we left off.

“We also learned from the previous crisis that we have to be resilient, that we have to prepare for sudden shocks. In 2008-2009, nobody was prepared on how to deal with such shocks. Another thing which is quite different from 2008-2009 is that we now have digital tools to help us,” Notteboom said.

Seroka said, “We have to accelerate technology. We’ve been working on this port community system, the only one in the United States, for four years now and I’ve called on the federal government to adopt a nationwide port community system. We’ve learned so much from our colleagues in Europe, Asia and the Middle East. It’s time to enable that technology here now.

“The one thing that I am convinced of, because we spent the time and the expertise and the study to implement our system here, it allowed us to invent and plug in what I now call the Medical Port Optimizer, which has allowed us to save lives. We have the ability to see product before it gets into a normal pipeline, speed it through our port and our LAX airport, and bring that product directly to the front-line hospitals. It has been a difference maker and we need to have ports in the U.S. adopt this method because if we’re going to reemerge as an economy, data is going to drive us and our companies toward that success,” he said.

Hoffmann agreed now is the time for ports to invest in automation and optimization.

“Ports are challenged to reassess their revenue models and business models. They’re also looking at digital transformation. These are two areas where ports and port authorities in particular can take up a very important role and at the same time can start thinking about how they can add to the existing revenue streams,” Hoffmann said. “Even small ports can have a role to play in digital transformation and in the greening of the supply chains.”

Decarbonization efforts should not be set aside during the coronavirus crisis, he said.

“It’s a good thing to accept realities and not wishful thinking and accept that climate change is a real threat and it’s growing exponentially, it’s getting worse,” Hoffmann said.

“COVID-19 cannot be an excuse to slow down … on green shipping targets,” he said. “We have to make sure that we continue on the path we set out years ago.”

Seroka believes the path ahead will look very different — greener — in a post-coronavirus world.

“In California there will be an emergence of green machinery at our ports and in our trucks and our automobiles that we drive, and we’re going to have to get skilled people around that industry. That means we need to upskill and reskill our workforce,” Seroka said. “We have 30% of our working population [in California] in the transportation sector today. We’re going to need to make sure that those folks and their successors have a pathway to good work in the future as well. And that’s going to come through our decarbonization plan.

“The new economy is going to look very different,” he continued. “We’re going to have to be as nimble as possible to hit the ground running.”

© 2020 Benzinga.com. Benzinga does not provide investment advice. All rights reserved.