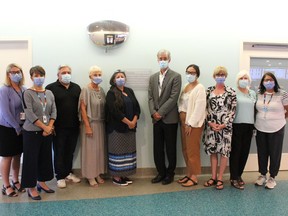 Since April, an Indigenous healer and an elder have been meeting patients at Sarnia’s hospital to offer traditional herbal medicines, Indigenous ceremonies, healing with hands and Reiki-like energy work, officials say.

Like the smudging ceremonies, hospital navigation help and Indigenous self-identification programs that have been introduced since she was hired in 2018, the traditional healing services are about providing culturally respectful and inclusive care, George said.

One healer and one elder have been conducting the visits mostly in the hospital’s spiritual centre, she said, but also in patient rooms and at Ryan’s House, a recovery facility at the hospital for people with substance dependencies.

Feedback has been positive so far and hopes are to make the program permanent, George said. The approach, she explained, is to look at a patient’s mental, emotional and spiritual well-being, as well as physical health.

“It’s also about bridging with the two – traditional with western” healing, she said.

There’s no substituting between the two approaches, she added.

“It’s there to work together.”

“Some individuals who have gone through many different services in our traditional kind of Western rehab programs (and for whom those programs) haven’t resonated with, we’re starting to find that some of the Indigenous practices are,” she said.

Traditional healing services at Bluewater Health are currently only accessible to Indigenous patients, George said, but there are talks about extending access.

“We’ll have to look at how we are going to be able to do that,” she said.

The Indigenous navigation team at Bluewater Health includes George and a transition navigator, who helps patients when they discharge to make sure they’re cared for and not lost in the system while connecting to other community-based care providers.

A third position was recently posted that will help Indigenous patients with substance dependency issues get support, she said.

That job includes helping patients who show up in emergency, mental health or other hospital areas that don’t specialize in addiction still get the care they need, she said.

“It’s extremely validating when you hear the conversations going on amongst a diverse group of people and their interest in creating an inclusive space in Bluewater Health,” she said.

About 40 people per month on average use the Indigenous navigation team’s services, George said.

As well, Bluewater Health’s commitment to truth and reconciliation and offering these services was reinforced by plaques that were recently unveiled in the hospital.

Expanding the scope of traditional healing services depends on finding more elders and others able to commit their time, George said.

“We don’t have a lot in this area,” she said. “It would be nice to continue with a couple of days a month.”